In 1970, Reverend Larry Lossing of St. Paul’s Episcopal Church in New Smyrna requested permission from the Diocese of Central Florida to hold a service at the beach. On July 19, 1970, the Right Reverend William Folwell presided at the first Surfer’s Mass. This quickly became a summer tradition, continuing into the early 1980’s when the beach services were discontinued, to the dismay of residents and weekend visitors from Orlando. Thanks to the efforts of both groups, services continued and were held at Coronado Beach Elementary School. Attendance grew and Father Tyrell Dear came on board to serve as a part-time Vicar for St. Peter’s beach side chapel. With continued growth, the communicants petitioned the Diocese and in January of 1987 St. Peter the Fisherman officially became a mission.

Puerto Rico has been ravaged by a series of earthquakes and aftershocks with the most severe measuring a 6.4 magnitude on the Richter scale. With the damage inflicted by Hurricanes Irma and Maria less than three years ago, this recent seismic activity has further tested the already compromised infrastructure of the island.

Anyone wishing to financially assist our brothers and sisters in Puerto Rico may do so via the Diocese of Central Florida:

Please keep the people of Puerto Rico in your prayers.

Need Prayer?
Let St. Peter's Daughters of the King share your petitions with the Lord. Click here to fill out our online form then our DoK will pray for you!
Photo & Video Gallery
Our Spiritual Life 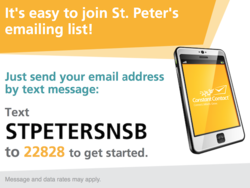 Message and Data Rates may apply. Text HELP for help, text STOP to end. Privacy info on this topic here.